This week, Mark was given a huge responsibility at the school. He was asked to be the Head Coach of the School Football Team for an upcoming tournament (I didn’t even know there was a team!). We’ve consequently taken a lot of joy from organising training sessions and transforming the children from Heskey’s to Henry’s – although we’re not quite there yet! 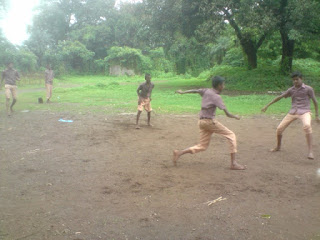 We also had an awesome weekend; we started with taking a boat ride to Elephanta Island in Mumbai, which held caves in the midst of dense forest with ancient Hindu statues carved into the rocks. Unfortunately Mark took all the photos that day so you'll have to wait to see them!

I also had the chance to look around the local fishing village and meet the families of some of the school children. I not only saw the children but also met their brothers, sisters, parents, uncles, aunties, cousins and grandparents, all of whom seem to live together! It was the day before the fishing season started, so dozens of large boats could be seen along the nearby shore.


Whilst this week has been good fun, little progress was made at the school. Exams took place each day in the morning, which meant that I was asked to play the fantastic role of the invigilator. After the morning tests, the children would either be extremely jittery or just sleepy – either way, most of them were disengaged throughout the rest of the school day.

During tuition time, the children would ask if Mark and I could help them to memorise the exact answers written out by the teachers for the following day’s exam. Whilst a fair number of them had little trouble learning the answers, it was pretty astonishing that some of the older children could not understand the meaning of the questions, let alone the answers. Ultimately, it was sad but unsurprising that a number of children failed in their exams. Teachers blamed them for not working hard enough and asked them to move down a year group until they pass their retakes.


Mark and I were able to fit in another Bible story with the children on the weekends. We focussed on the message of ‘turning the other cheek’ and got them to act out different scenarios. There’s a quite a bit of pushing, shoving and name-calling that takes place amongst the younger boys, so hopefully the stories help to spread the love here!